Is Michael Crawford a real person who developed a software that can make you “$13,671.32 Per DAY on autopilot“?!  Or these guys are just borrowing someone else’s name in order to gain your trust and then rip you off your money? Join me in this Quantum Ad Code Review in order to expose these people and help you learn how you can really make money online through building a real online business and not through non-existing software programs!

I have reviewed many of these “done-for-you” software programs and systems that promise you to be able to make thousands of dollars per day on autopilot right since day one of joining them, and I know how tempting it feels to want to try them. But I want to be honest with you and tell you that there’s nothing like that at ALL. Sorry!

Hold on with me and I will show you below why I say that these claims are completely far from the truth. And, as you will see below, the video on sales page of the Quantum Ad Code “software” is more than enough for you to know that these guys are lying to you and are just after your money and won’t give you anything in return.

I will show you below why I DON’T recommend you to buy this “software” that will only make you lose your money forever!

And I will guide you into a 100% legit and real method to create a REAL business and brand online that helps you generate a consistent income, IF you put the time and effort to apply what you learn. There are NO Magical Push-Button Solutions!

Note: If you want to save your Time & Money and stop looking for the magical solutions, then you can head directly to my guide for the #1 method of making money online through this button:

Overall OnlinePassiveIncomeGuide.com Rating: 0 of 100 (Check my #1 recommended program 97 of 100)

Summary: Quantum Ad Code is a SCAM program that is designed to let you deposit $250 into a trading platform hoping that you can make money through a loop hole or a few clicks a day, which is not true at all.

What Is Quantum Ad Code Software? 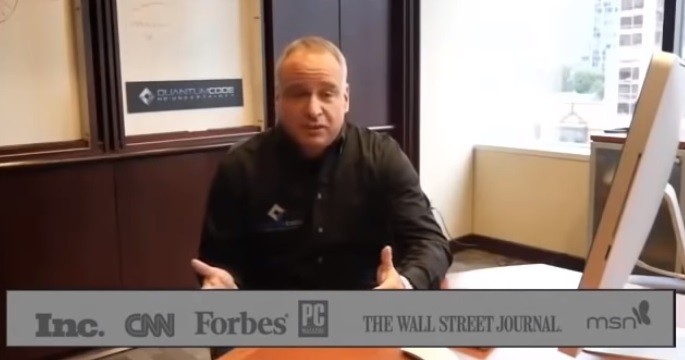 In brief, the QuantumAdCodeit’s nothing other than a place where you put $250 and they disappear.

The guy in the video who calls himself “Michael Crawford” and claims to be a philanthropist is actually a paid actor whose name is called “Jason Glick“.

If you search Google for the term “Jason Glick Actor” you will see the truth! 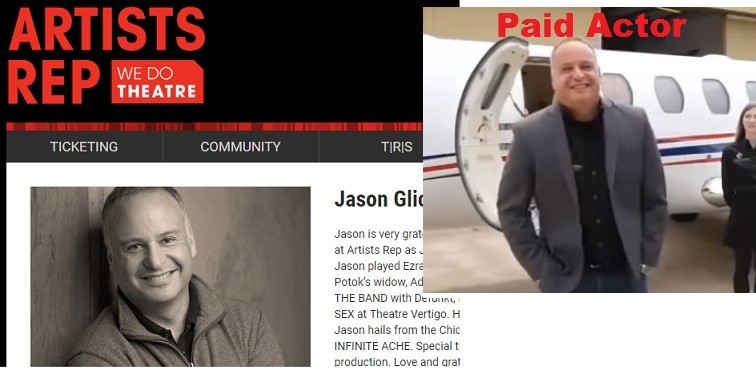 While if you search Google for the term “Michael Crawford philanthropist” you will find that there is areal person with this name, but he’s not the person you see in the video. They used the name of a real person in order to sell you their “system” and take your money!! This is completely illegal.

The same video and the same sales page used to be used to sell another software that is called “QuantumCode”. Now they call it “QuantumAdCode” in order to deceive new people after they have been exposed with the first one.

And worse, they are using the same domain name and the same sales page layout of another scammy program that I exposed in my Free Ad Cash System Review. (screenshots below).

The guy tells you that, with the software he developed, you can make thousands of dollars on autopilot everyday once you start using the software.

What does that software do?! No one knows!!

Please, don’t hand over your money to these jokers! This is just another lie.

I have reviewed many of these done-for-you systems and software programs and I can tell you that there is nothing brings you this amount of money on autopilot once you start using it. Not online and not offline.

There are many real ways to build an online business, and I have tried some of them until I found the one I recommend in my FREE make money online guide. And I can tell you that there’s absolutely no way that can bring you money on autopilot once you start.

But after you grow your online business, you can then hire people or automate parts of the work for you with the tools that you use in order to minimize the number of hours you need to put in your business.

I will show you with the screenshots below why I say that these people here are lying to you!

So, How Does The Quantum Ad Code Really Work? 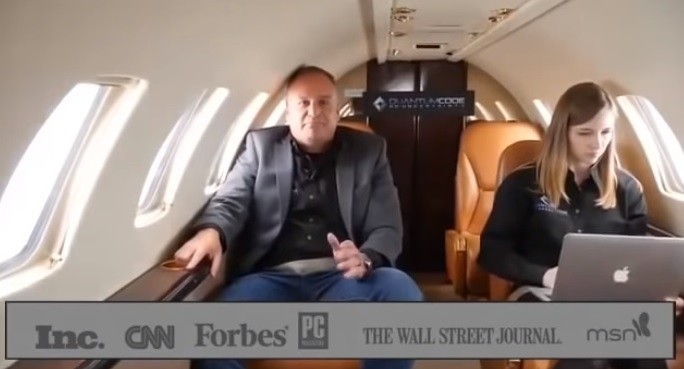 Honestly, who knows what you will be told after you pay $250 for the “completely FREE” software?!

But I can tell you that it works by creating such a video with paid actors and rented jet and offices, placing the video on a sales page, and then, inviting you to pay them your money that will cover the costs of recording this video.

As I mentioned, what they claim in the video about using a software and making money on autopilot because their system is “faster” than everybody else’s software because they use some “quantum-neuro” blah blah blah technology, doesn’t make sense at all.

He says that there’s Unlimited Amount Of Money for Unilimited Amount Time that you can generate with this software!! Who believes such a crap!!

And I can tell you that there has never been and will never ever be something like that !

In order to make money, whether it was online or offline, you need to provide value and do something that deserves the money. Money doesn’t come out of nowhere!!

The difference between making money online and offline is that online, you can start with a smaller budget (even with $500 with the method I recommend in my guide), and you have flexibility over the time and the place you want to work from.

I don’t know where to start from. But let’s go with the video on their sales page:

This guy (called Mark in the video) says that the software keeps making him money.

Well this guy is actually a paid actor who is called “Jeff Janoff” that is just doing his job by acting. 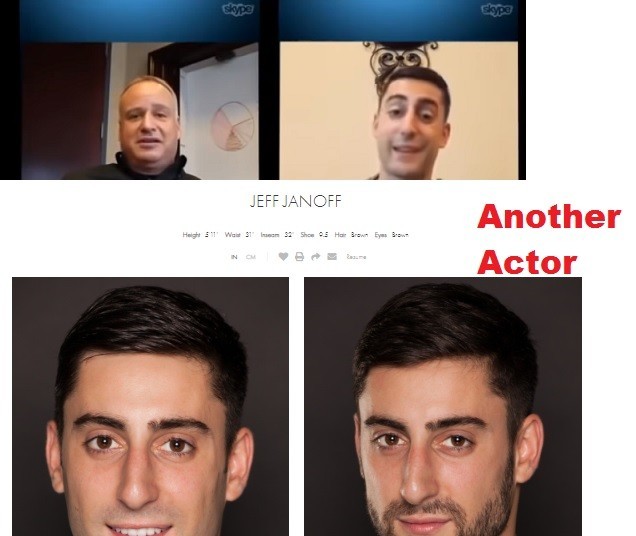 And the same applies for the other guys.

Unfortunately, it is a common trend among many scam programs to fake such testimonials in order to make people believe them.

And even worse, if you click on the “Start Earning” button and head to the next page, you will find some other fabricated testimonial like the one here.

This lady is actually an American film director and producer who is called “Ava DuVernay”. She has nothing to do with the Quantum Ad Code, they are using here photo in order to fabricate testimonials. 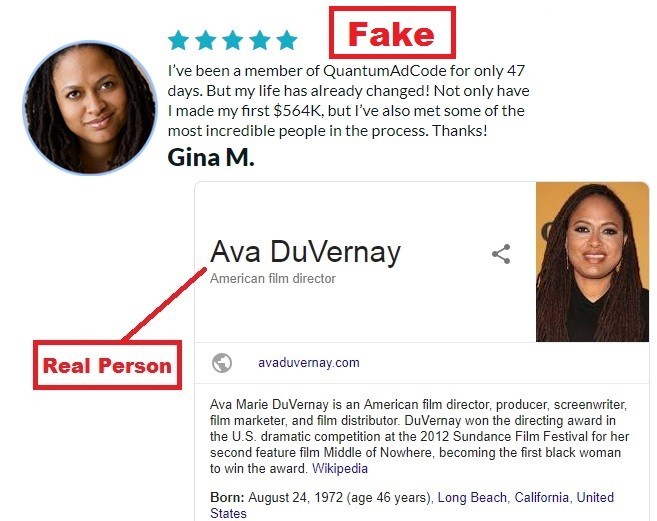 And they even used the same photo and same text in their first product that is called “Quantum Code”, except that now they call it “Quantum Ad Code”.

This should be an enough reason not to trust these guys!

2. The Guy Who Calls Himself “Michael Crawford” Is Actually An Actor

As I explained earlier, this guy in the video is an actor called “Jason Glick” and pretends to be someone else that is called “Michael Crawford”, who in fact over has nothing to do with the Quantum Ad Code “Software”.

They say that you just use the software and it will start making you thousands of dollars a day right from day one!! In return of what?!

They say that it can bring an unlimited amount of money. Really?!

Please, don’t believe such a BS!

4. They Say It’s Completely Free! But…

5. The Sales Page Is The Same Of Another Scam

These are supposed to be different systems. But they are both hosted on the same domain name (freeadcashsystem.com), both make you the same extra amount of money per day, both tell you that there are only 4 spots left, same page layout and the same “For FREE” to use, but then you have to pay!!

So, What does that tell you?! 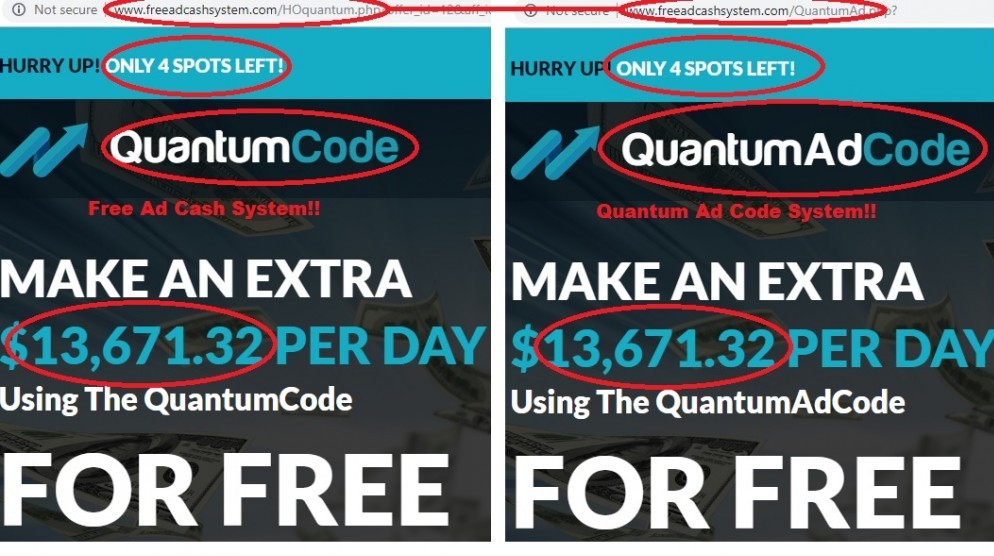 These guys keep reproducing the same BS but change the names in order to come up with new “systems” and “software programs” by changing the video on the sales page. And then, they advertise their “new” crappy system as a new one!!

Just check the sales page! Nothing on it other that the button that invites you to “Start Earning”!

Who Is The Quantum Ad Code For?

Conclusion – Is Quantum Ad Code A Scam Or Legit?

Of course it’s a Scam!

Overall OnlinePassiveIncomeGuide.com Rating: 0 of 100 (Check my #1 recommended program 97 of 100)

Never hand over your many to someone who tells you that they have a complete “done-for-you” system, software, program, …etc. You will only lose your money and time.

If you want to make an income online, then you have to build a real online business that provides value and deserves to get paid for!

A Real 100% Legit Alternative To The Quantum Ad Code

As I explained earlier, what is in the sales video of the QuantumAdCode software is just a big lie that is told by paid actors. Such promises are completely unrealistic and don’t make sense at ALL.

The fake testimonials are enough for you to avoid it.

You can’t make thousands per day just by starting to use any system or software.

If you want to make money online, then you should do something that provides value to people and improves their lives or solves their problems.

And this requires putting in real work and effort, and takes time to accomplish. Just like making money offline.

But as I mentioned earlier, when it comes to the online world, at least you have more flexibility over the place and time you choose to work.

And better, you can start an online business for much a lower investment than making money offline. (even with $500). But you still need to work and to be consistent and patient before you get any real results. Like offline businesses.

And in order to be successful in any business, you need the right mentoring, training and tools that will help you start the right way right from the beginning.

And that’s why I have created my FREE Ulimate Make Money Online Guide that allows you to start even for FREE before you risk any money!

The way I recommend in the guide mentioned above is only one of the many real and legit ways of making money online. But the one in the guide is, in my opinion, the most beginner-friendly and the one requires the least investment to start.

You can try it for FREE before you decide to pay for anything through the guide mentioned above. No Credit Card Required!

In my guide, I will show what this method is, how it works and why I like it.

It’s a completely LEGIT way to make money online IF you apply what you learn consistently. No more magical “Push Button” solutions! Sorry for being honest, but these don’t exist!!

I will guide you also to the same platform where I started learning this method, and the platform that provides you with a step-by-step Training, Tools, Community Support and where you can get DIRECT COACHING from ME.

And the most important part is that you can try it for FREE before investing any money.

And again, forget about the magical solution that promise you to make $13,000+ per day like what the Quantum Ad Code guys claim. Please stop wasting your money and time following these solutions. They Don’t Exist!

So, if you are ready to take action and build a REAL and LEGIT business online, then clicks on the following button in order to read my guide and start taking action.

And if you have any question regarding this Quantum Ad Code Review, leave it in the comments section below and I will be coming back to you ASAP 🙂